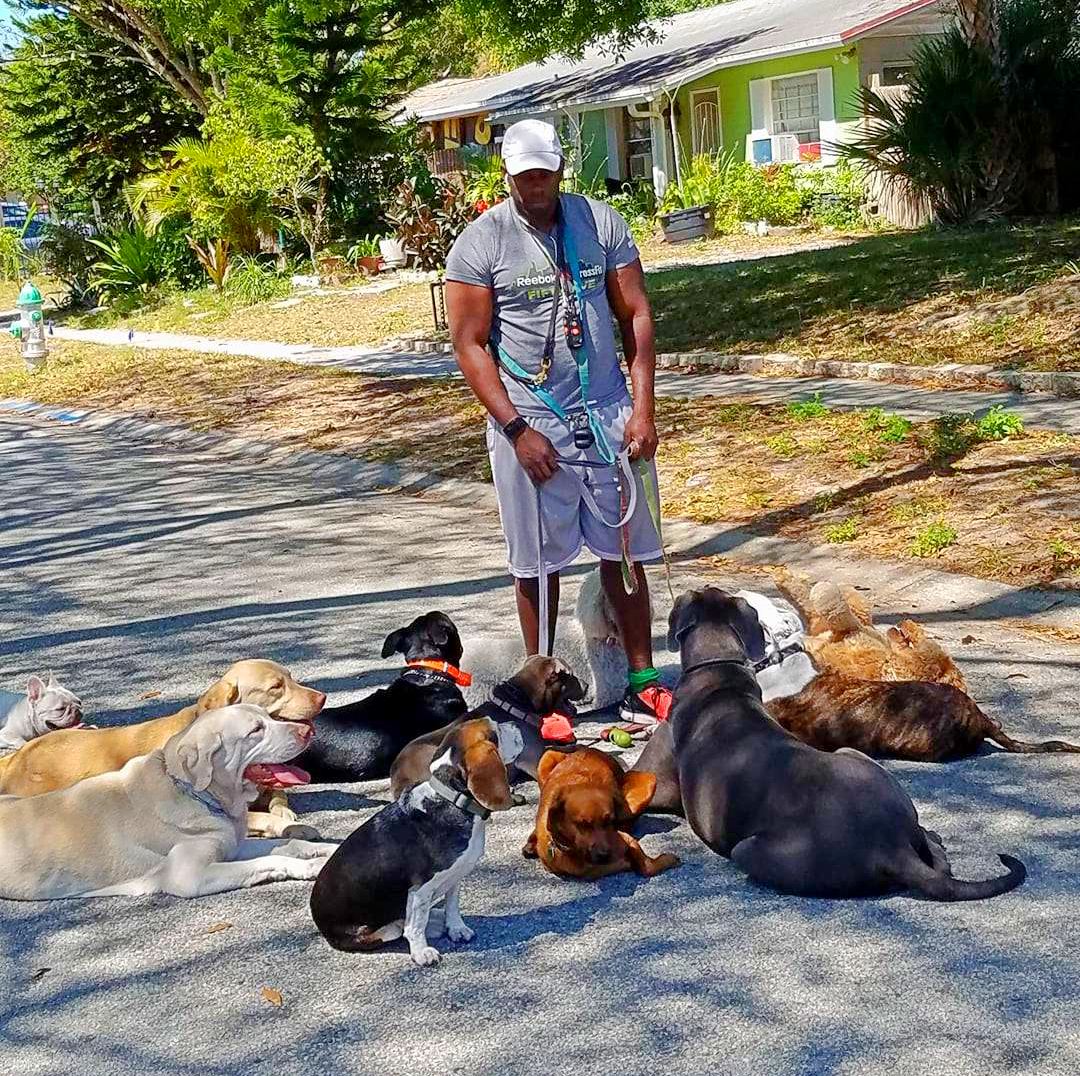 Hello, my name is Laurent Gabriel and I’m the owner of Elite Professional Dog Training. I’m located in Winter Park, but I serve all of Central Florida. I’m Florida’s Best Dog Trainer because I have a 99% success rate training dogs since 1990.

How I Learned Dog Training

Let me give you a little information about myself so you know where I come from and how I learned dog training. Short story, I worked under and with four exceptional dog trainers and learned from the very best including Gottfried Dildei and Phil Hoelshur.

When I was a kid, I always wanted to be a veterinarian. I remember the days when my father would, as we’re riding on the road, he would tell me that anytime I would see an animal on the ground I would cry and say, “I’m going to help that animal.”

My Neighbor Was A Dog Trainer

Fast forward, in Jacksonville, Florida, I was living with my mom and we found out that my neighbor was a dog trainer and my mother was saying, “Hey, well, if you want to be a veterinarian, why don’t you go talk to the next door neighbor?”

Because me being a kid, I was a little shy, but I rustled up enough courage to go over and ask him and he was an old-school guy, and was like, “Yeah, let’s see what you’re made of.”

Why Kennel Work Is Important To Dog Training

For the next six months, I did kennel work. Why is kennel work important to dog training? In my opinion, I think kennel work is one of the most important parts of learning how to be a dog trainer, how to interact with the dogs, the approach, because you’re dealing with different types of personalities.

Whether it be fearful dogs, whether they are aggressive, whether they’ve been traumatized, the happy-go-lucky ones — the ones that we all love — but you don’t always get to deal with that. Six months later, he gives me my shot and he teaches me the basics of all how most dogs trainers learn. Of course, leash walking, loose leash walking, sit, down, stay, the whole nine.

“You’ve Got To Figure It Out”

But there’s a twist. He told me, “I’m going to give you a dog and no matter what the problem is, you’ve got to figure it out.”

My first dog was 140 pound Rottweiler that was aggressive. It was more so territorial, lack of socialization, but I didn’t know that. I’m a kid. Anybody that he didn’t know he would go after.

Of course, he’s in what we call boot camp, but I call training camp, and he goes, “Here you go.” And I laugh and he goes, “Well you got one to two options. You can train the dog or you can get out because I can do it myself.

“But in order for you to become the trainer that you want to be you have to be able to take on these dogs. No matter what is thrown at you, you’ve got to figure it out.”

I figured it out. And that set the journey to where I am now.

I Worked With First Dog Trainer For 10 Years

I worked with him for another 10 years, and surprisingly I didn’t go to school for veterinary medicine. I actually went to school for computer science. I was actually the first student to get a network security license and certification from college. Total opposites, right?

What I did do though is I kept my dog training going. When I graduated from college, I moved to Orlando back in 2005. In 2007, I decided I’m done with corporate America, so I need an exit plan. Dog training was the thing.

I Always Wanted To Own A Dog Training Business

I’ve always wanted to own a dog training business. Why not start now? So me thinking that I’ve worked with him, I’m in central Florida, I’m a dog trainer, but no one knew who I was.

What I would do was go to different veterinarians, doggy daycares, food shops, you name it, and I would parade around different dogs.

I would even go to the downtown Farmer’s Market in Winter Park when they used to have it in a small, located area. And I would take my dogs and I would parade them in that area. Perfectly well behaved.

It wasn’t until 2008 I actually got my first dog. And then from there it took off. Now again, me being young, me being cocky, and I would take on anything. Didn’t matter what it was because I had something to prove.

But what I didn’t know was that there are other types of training. Let me explain it. I wanted to go more into the protection training, because face it, it’s a macho thing. But I enjoy doing decoy because you got a good workout.

I love to work out, so I’m good, don’t mind sweating. Not to mention I get to play with dogs. I called a guy by then who was located in Chuluota, Florida. I was up front with him. I said, ‘hey, I’m already a dog trainer, but I’d like to learn more because I heard that you are great at what you do.’ He said, “Yeah, come on over.”

This Is Where I Learned A Lesson

This is where the first time my ego was shot, where I learned a lesson. I have this Lab. His name was Brock. I love labs. And so he comes out and he shows me his Shepherds and he has a Malinois. His Malinois was just phenomenal.

Me, I’m like, “Oh, let me bring out my Lab.” And I brought my Lab out and he looks at me, he goes, “That’s great for home obedience, but if you’re going to get into competition, you need to forget all that you just did and you need to do it this way.”

Not Every Dog Can Do Performance Training

Now, not every dog can do that. You just have to find the right dog or you have to be the right type of trainer.

As I started learning the whole competition obedience, it was a lot more fun. Because now you get to see the difference in the dog’s behavior. It’s more upbeat. You have to be too. Most people don’t understand the dog feeds off of you.

For my 30th birthday, I wanted to complete an Ironman, and one of my teammates introduced me to a guy by the name of Gottfried (Dildei), God rest his soul. And me being a decoy, which is basically a sparring partner for the dogs, if you put it in that perspective, I was able to meet him. I introduced myself. I gave him a little bit of my background and what I’ve done and asked if I could learn from him. And I remember that day.

First day I went over, we were bringing out a green dog. A green dog is a dog that doesn’t have much experience and I think the dog maybe had two or three sessions, and he said, “Look, I’m going to show you the difference in bringing out a dog and shutting down a dog.”

So you bring the dog, he brings a dog out and it was in a blind, which is like a corner. So a corner which the decoy backs into, and there’s shades that go over it, so when the dog comes up, there’s that corner, he’s inside the blinds and he says to the dogs, “Don’t move, don’t move. If you move, I’ll bite you.” That’s what that is.

He was behind the fence, because sometimes when a dog is not used to that type of scenario, the dog can be a little unsure of himself. He sends him off and the dog starts barking “Ruff, ruff, ruff.” And he bends over a little bit and then the dog slows down a bit. The voice slows, and then he just slightly backs up, and then all of a sudden you just see this explosion.

And right there — again me being young – I was so intrigued because I’d never seen anything like that. I decoyed for him for three or four months. I can tell you what, those three months were very, very valuable in that aspect of wondering, of dog training. Because regardless of what you do, you can always learn something from other trainers.

I finally got to meet a guy by the name of Phil Hoelschur. Now, Phil Hoelschur is the one who taught the very first dog trainer that I worked with, how to become a good decoy or Schutzhund and performance.

So I got to meet the Grand Master, which is pretty cool. And Phil has a list of accomplishments, that it’s just unbelievable. I worked with him for three or four years, and through him, through repetition, I became a national decoy.

When you’re working with a working dog — a true working dog vs. a home pet — the animal or the mentality is totally different.

You have your sport, ones that are good for sport and the ones that are good for defense. Defense would be your police dogs, your military dogs. And the sport dogs would be your Schutzhund, your PSA. I’m talking from a protection standpoint. They’re different caliber dogs because sport dogs are meant to bite equipment and the other dogs are meant for biting humans or protecting the force or the platoon.

I had the privilege of being able to work for him for years. Three or four years. And I still, from time to time, I try to go back. I haven’t been in a while. But the goal now is to be able to take my own dog and compete at the highest level.

I Learned How To Become One With The Dog

What I’ve learned over the years from working from all the trainers is show me one thing. I’ve learned it taught me how to become one with the dog. I mean, it’s so many different perspectives and thought processes and you name it, everybody has tried it. What I do is I use what will get the job done. And that’s why I’m successful.

Life becomes easier when you train with Elite